skip to main | skip to sidebar

Support for Our Users - Windows 7

As part of the Windows 7 Houseparty promotion, I received an early copy of Windows 7 to demonstrate at the party. Like so many who tried the beta and release candidates before me, I got to see what everyone else will soon see.

First impressions are mixed.
Pros:
Cons:
But what got my attention most was the Problem Steps Recorder, or PSR. This is a simple looking "Record" tool that allows a user to record exactly what they did to recreate a problem, then send the resulting zip file to their support staff to see what happened. No mucking about with insecure remote desktop controls, just a straightforward recording. The result, once you unzip the file, is an MHT file that shows screenshots of each "step" and lets you walk through what your user did to recreate the problem AND if you don't see the same problem, it's in screenshots, so you can see what happened. For those of us acting in support roles, the death of "could not reproduce" status is upon us!

I'm also a user, though. I've had to submit bug reports to companies that blithely say "could not reproduce" when the problem starts to look difficult. I won't mention names, but yes, we all know those vendors. Even with good vendors, it's often hard to get them to understand what you mean when you say "I clicked on the thing that looks like a wrench and it blew up". Rather than taking out a camera or installing a third party app, this puts the functionality in easy reach.

And that easy reach benefits us in two more ways. First off, it makes it something support techs will be familiar seeing soon, and will even know to ask for or create easy-upload features for. Second, it's three letters that you can tell your end-user to type over the phone and a very simple interface that anyone who can work a VCR can figure out.

The major downside is that it's only screenshots. I also noted that it didn't pick up mouseover events or anything done to the PSR itself. You can't open a second PSR window, so problems with the PSR can't be reported with the PSR. There's also some confusing language that results.

For example, I had selected some text on Firefox on the NUnit download page and dragged the text, then dropped it. This is what it said with a reduced version of the screenshot it attached: 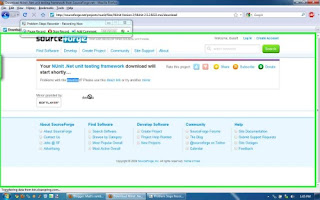 So definitely some work left to be done with this. I'd like to see a film version in the future, but for now, this is a huge leap forward from having users take single screenshots and manually putting this history together, or worse, summarizing and glossing over what they did as they describe it to you over the phone. I look forward to having Windows 7 deployed in the environment I work in.
Posted by Merennulli at 12:44 PM No comments: